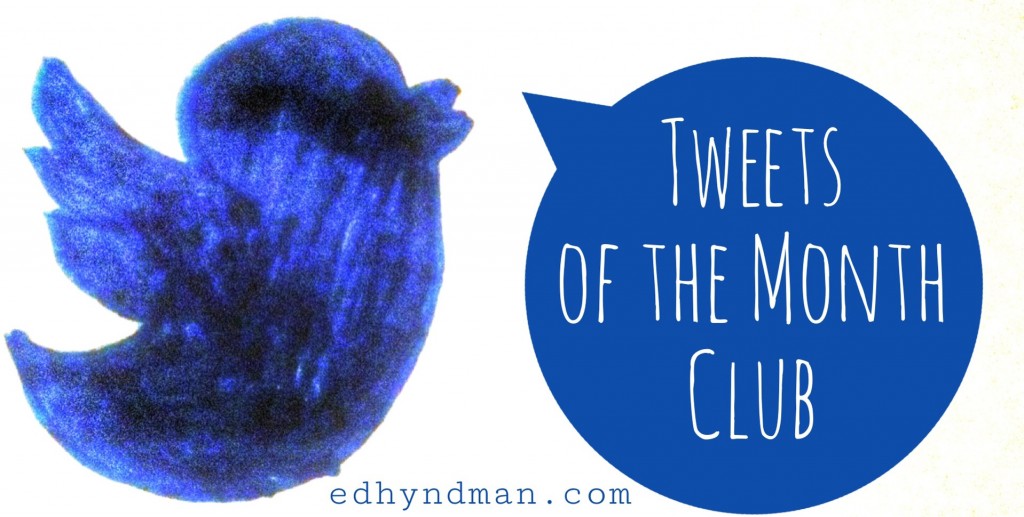 April was a busy month—Easter; the 50th anniversary of Martin Luther King, Jr.’s death; Winter 2.0; the birth of the royal baby. Here are the best tweets about those things and others.

Someone gave me a Jesus figurine that’s made out of a sticky flammable organic substance, insoluble in water, exuded by some trees.

He is resin, indeed.

It was finished so that we could begin again.

Death used to be an executioner. Now, because of the resurrection death is merely a gardener. —George Herbert

You don’t bury a Christian; you only plant them.

Today is the day when all of us at Non-denominational/majority Millennial churches actually dress up for a change. #Easter

Happy Easter friends. We live in a world where God raises the dead. Let's never forget that, no matter how much we're told otherwise. In a world of bad news, this good news resounds as brightly as ever.

This is the worst VBS musical I’ve ever seen. #JesusChristSuperstarLive

Something Dr. Moore said once and it is true every single day: Everything we do at the @ERLC should point to Easter. No matter how great the other things may be, if we don't do that, we've failed.

Welcome back, Lenten Twitter Abstainers! Don't worry, nothing much happened on here.

(Everyone else, remember, the code word is "Twizzler")

Publishers try to marry these two vocations, but it's really okay that they're *very* different things.

When we try to mesh them, we end up with the dishonesty of ghost-writing, the sloppiness of unintentional plagiarism, and the impression that everyone can be everything.

Don't let the pressure get to you, speakers and writers. Most books published these days should just stay blogs or tweets or sermon series.

My son was joking with a friend, saying she’s so hyperactive she has 90HD.

Dear Winter: A bunch of holidays are in your season and you're thinking, "This is great. People love me." But the party is over. You are uninvited. It's time you must go. We. Are. Cold.

Finding a typo in an editorial style guide be like pic.twitter.com/4Gae516W27

And people who claim to be fellow Jesus followers react with rousing reminders of all the reasons they should hate one another, shun each other & avoid each other like a plague of horned frogs, I just cannot imagine that it gives Jesus that warm fuzzy feeling.But maybe I’m wrong.

I can do anything … except monkey bars. — 5 year old

That’s an amazing mix of self-confidence and realistic appraisal of limitations.

Netflix is suggesting that I watch shows I’ve already binge watched ON Netflix.

It’s like, we’ve spent all of this time together and you don’t even know me at all, Netflix! #betrayal

The other 50% of my brain: pic.twitter.com/Fk8TfNH3FC

There is no righteous way to be racist.

"There are some days when the new mercies you woke up to don’t seem as bright as you’d like them to be. But even when your day gets darker, know that the promises of God will not set with the sun." – @JackieHillPerry

Little Einstein’s *pointing at a heart shape*: What else do we need to give our plant?

So it might not be her cuteness that kills me. pic.twitter.com/RXEArR5CBu

Do not ever let anyone tell you that pigs in a blanket is not fancy enough for a baby shower. pic.twitter.com/f1aaRkB1CU

Living with a 6-year-old is a lot like what I imagine living with Billy Eichner would be like.

I don’t 100% understand what the dark web is but I have tried online dating so I think I get the gist.

Please take the time to read the fine print on that one. So many deep cuts.

spammers are getting very insistent pic.twitter.com/NnxjuNFwO2

Cool people: check out this is tattoo I got when I was backpacking in New Zealand
Me: this is a bruise I got from bumping into a door

Teachability trumps gifting every time. Give me someone who is less gifted but teachable over the all-star who can’t be taught. #leadership

.@LizetteBeard to @carolpipes: "Have you been to Loretta Lynn's Ranch?"@juliermasson: "Who's Loretta Lynn? Is she some famous person?"

Lizette, Carol and me: pic.twitter.com/i0QqUN13be

Ohhh man, we had no idea how many of you were coming and don’t have enough people to handle this.

A professor choked back tears while reading Scripture today.

This is what we students might need more than anything else: teachers who haven’t lost their complete and total awe for the truth they are teaching, but instead have found themselves increasingly undone by it.

BREAKDOWN OF MY DECISION-MAKING:

50% based on avoiding getting yelled at
49.8% based on not getting made fun of

Jesus is real. I know that's simple, but I also know that much of my sin (fear, anxiety, etc) stems from forgetting this simple truth.

My phone has refused to take screenshots the last two days.

I assume this is some sort of Sanctification Setting.

Make-Up Tutorial: Second guess ability to pull off the super staining red-hot lip to your nephew’s baptism; attempt to wash it off; look like a cannibal.

There are still a few of the sermons I want to watch from the MLK 50 event, but I did watch this one and highly recommend watching.

“Actually if you take it from over there, the light will be better because the sun will be behind me.”

I realize this is your third child, Mr. and Mrs. Middleton, which is why it’s even more important that you get on the volunteer rotation for the Cuddlers and Crawlers room. #royalbaby

If God was like us, He would fail us.

Peppa Pig and her animal friends are going to the zoo. I’m interested to see what kind of existential crisis this brings about.

when the tweet above this one is really good pic.twitter.com/mMMdTM0mSC

The Duke and Duchess of Cambridge leave St Mary's Hospital with their new arrival, a baby boy.
Their Royal Highnesses have thanked all staff at the hospital for the care and treatment they have received, and thanked members of the public for their warm wishes. pic.twitter.com/6tSLv9JX8q

I cross my fingers every day in hopes that one of my tweets is retweeted onto the timeline of someone who doesn’t like me.

Just got a call from the “National Opinion Institute.” They’ve come to the right place.

I'm not in a position to offer much writing advice, but I will say: only write for places that care enough to edit you.

The Duke and Duchess of Cambridge are delighted to announce that they have named their son Louis Arthur Charles.

The baby will be known as His Royal Highness Prince Louis of Cambridge. pic.twitter.com/4DUwsLv5JQ

Guy next to me on flight read a Bible app before takeoff and then brazenly ordered a Diet Coke with no ice because he "prefers it a little warm." Christians, be aware of your witness.

I recently had a conversation with a college student who said he is drawn to liturgical worship because it fills him with reverence for God.

Jesus is our friend, absolutely. But that should never overshadow the fact that he is our Lord.

Think I’m ashamed for order a kids meal at Chick-fil-A? WRONG. I’m getting ice cream out of this. I am THRIVING

When the psalmists refers to themselves as “righteous” & “upright” it feels strange. I know myself too well to use that kind of language. But, that’s the problem. My introspection hasn’t been anchored by faith. The faith that God has indeed made me new even when I feel the same.

"It matters to God how you treat His kids." @PriscillaShirer #PSLive18

"Division in the body of Christ is demonic." @PriscillaShirer #PSLive18

"He paid much too high a price to bring us close for us to still be tolerant of the lines that divide." @PriscillaShirer #PSLive18

“It’s my job to make beautiful things.” @TrevinWax on the phone with me just now.

If only we all had this amount of ingenuity. pic.twitter.com/J23qjlfrMR